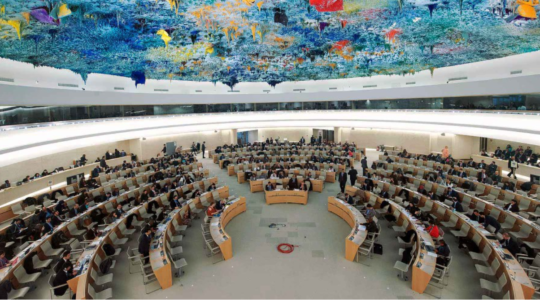 The Universal Periodic Review (or UPR) was created in 2006 under the responsibility of the UN Human Rights Council (HRC). It is a UN mechanism that is renewed every 5 years and reviews all UN member states from a human rights perspective

The UPR takes place in Geneva. Its objectives are to promote human rights and share good practices to effectively address human rights challenges.

Who participates in the UPR?

The various parties involved in the UPR mechanism can be divided into three categories: UN Member States, UN agencies and other stakeholders.

For each country under review, a group of three country rapporteurs, called « troikas », is selected to prepare the « final report » containing observations and recommendations to improve the human rights situation in the State under review.

The three reporting countries draft their « final report » on the basis of three official documents:

France will be reviewed on 1 May 2023 during the 4th cycle of the UPR. This review is an opportunity for France to defend its human rights record, in light of the recommendations made by States during its 2018 review.

Written contributions from the NGOs of the Water Coalition

The review of France in the framework of the 4e UPR cycle is an opportunity to highlight the situations of obstacles to the implementation of the human rights to water and sanitation that still exist on French territory.

She is also co-signatory of a written contribution on the rights to water and sanitation of exiled people in the North of France (submitted by Solidarités International, Calais Food Collective, Roots, Vents Contraires).

1. Human rights to water and sanitation in DROMs

This contribution takes stock of the situation through an analysis of 4 (out of 5) of the human rights criteria for water and sanitation: physical availability and accessibility, affordability and quality.

The facts presented are based on data collected on the ground from local actors, supported by written reports and official figures, most often from the French authorities themselves, whose references are presented.

The study of the four criteria of the rights to water and sanitation highlights chronic problems: poor infrastructure, regular water service cuts, high water bills and polluted water, with dramatic health consequences. This impacts on other human rights: the right to life, the right to integrity and security, the right to dignity, the right to health, the right to education…

The situations presented do not exist at such a level in mainland France (except for marginalised and/or exiled populations living in camps, shanty towns or squats). The lack of an appropriate and effective response from the State and local authorities, including the lack of effective legal recourse, means that users cannot be granted redress, compensation for the damage suffered, or emergency solutions to put an end to the violation of their human rights.

Main recommendations brought to France’s attention in the framework of the UPR :

2. Human rights to water and sanitation for exiled people on the northern coast of France

The situation of exiled persons present on the northern coast of France is the most critical in mainland France in terms of the right to water and sanitation. This coastal area is one of the main crossing points of the migration route, with the presence of people in exile for short periods of time. According to local associations, the number of people exiled to the North varies between 1,000 and 3,000 each year and includes single men, women, families and unaccompanied minors.

Although the extremely precarious living conditions of these people have been widely known to the authorities and reported in the media since 2016, no satisfactory measures have been taken by the authorities to ensure access to water, hygiene and sanitation that is sufficiently dignified or meets at least the international humanitarian standards used in crisis situations (SPHERE standards).

This written contribution details the current state of the infrastructure or mobile devices put in place by the public authorities and analyses the situation of the North Coast on the following criteria: continuity and availability of the water resource, physical access, security of access and related health risks.

Based on these criteria, the findings of the situation analysis on the northern French coast clearly show that the objective put forward by Sierra Leone in its 2018 recommendation, which involved the implementation of coherent and long-term strategies to provide access to safe water and sanitation for migrants in Calais and northern France, is far from being achieved.

Main recommendations brought to France’s attention in the framework of the UPR :

Both contributions were posted on the UN Human Rights Council website at the end of September.

The next steps are as follows: